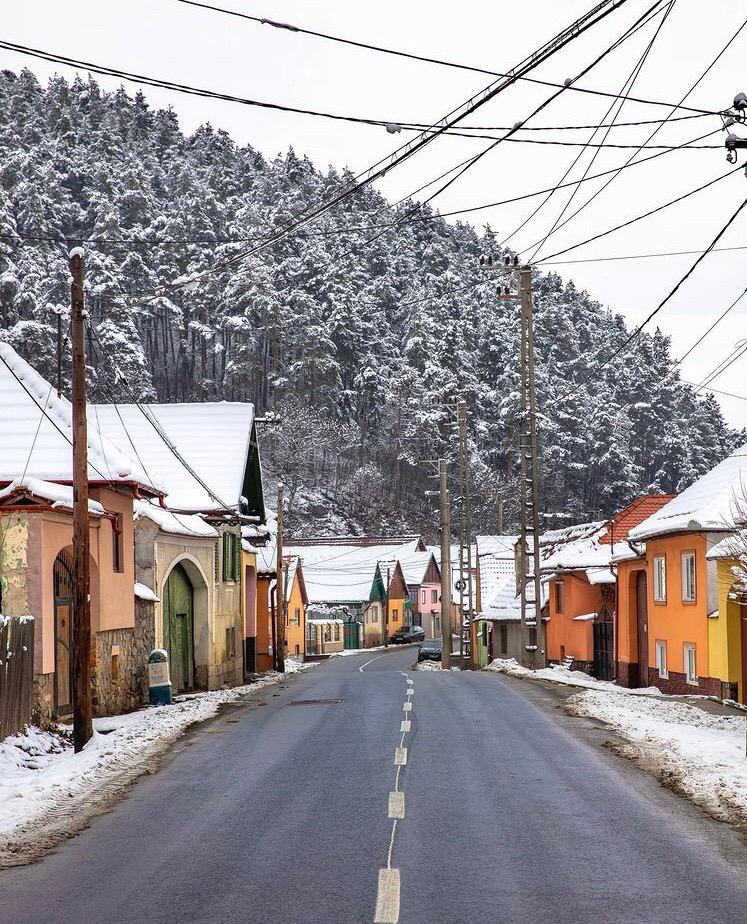 Orlat (in the Saxon dialect Awersch-Bleschderf, in German Winsberg, Ortenbach, in Hungarian Orlát, Váralja, Váraljafalu) is the village of residence of the commune of the same name in Sibiu County, Transylvania.

The locality is located in the Cibin depression, 17 km west of Sibiu, at an altitude of 483 m and is crossed by the Cibin river, the Negru River (Săliște) and the Orlățel brook.

The year of the first written attestation is 1319, with the Latin name ecclesia de monte Civinii praepositurae Cibiniensis, meaning “the church under Mount Cibin of the Prefecture of Sibiu.” Later it appears attested as Warolyafolwa, meaning “the village under the Citadel.”

The Hungarian name refers to the Orlat Fortress, which was in the Middle Ages a Hungarian royal fortress. The Saxon name (Bleschderf, meaning Valah Village) of the village suggested the hypothesis that this is an ancient Romanian village with the character of continuity of habitation from the Daco-Roman period.

Every legend gives birth to another legend … so it happened in Orlat, where the elders of the village still tell about how the giants would have arranged the surrounding mountains, forests and valleys, giving birth to a wonderful landscape.

The elders also tell how, a long time ago, when the village was attacked by invaders, people hid in the mountains. After the attackers left, the leaders of the community went down to the village, and after making sure that the danger was removed, they shouted to the mountain people to “scream in the valley”. The verb “to scream” then meant “to descend”.

Located at the meeting of the mountains and the plain, Orlatul has had a strategic position over time. The Romans built watchtowers on the surrounding hills; in the 1st-2nd centuries there was a pre-feudal fortress here, and in the 13th century a medieval fortress was built.

Moreover, between 1764-1851 in Orlat was the headquarters of the command of the 1st Romanian Border Regiment, which defended the border of the Habsburg Empire between Haţeg (Hunedoara County) and Zărneşti (Braşov County).

The inhabitants of Orlat practiced handicrafts, in the 16th century they laid the foundations of the first manufactures, and in the 19th century in Orlat there was a factory of cloth, paper and wood exploitation.

As in any village in Mărginime, you can visit the Orthodox church in Orlat, built at the end of the 18th century in neoclassical style with baroque influences and neo-Byzantine fresco. And because there was a border regiment in Orlat, for the Roman Catholic officers the church of the “Germans” was built, dedicated to St. Teresa of Avilla.

Also in Orlat, you can visit a multitude of tourist attractions, such as:

Also in Orlat, there is a fortress that is said to have been documentary attestation for the first time in 1319. It is the Short Fortress, a monument that bears more legends than the years it has.

Most of them talk about Dacian gold. It is said that on the hill behind the fortress, Decebalus hid a hard-to-estimate treasure, which many would have tried to find. In the 17th century, surveys were even made here by a company from Sebeș, specialized in such works.

The letter mentions a room full of human skeletons, through which you had to pass before reaching the room where there was a statue of Decebalus made of solid gold and other extremely valuable objects as well as silver and precious stones. The legend remains a mystery, however, because the gold from Orlat was never found, at least not officially.

For hiking, a walk on the Plateau of the Citadel Hill is ideal, to admire a superb panorama over the whole commune and its surroundings.

Did you know that…?

Well, Orlat is a village endowed with a rich history, a village with unique places with a strong significance, with hardworking and modest people, a place worth visiting.

Until next time, be grateful and enjoy your journey!