Hey buddy, nice to meet you!

As I have already  accustomed you, guys, I like to tell you about my muse, Alex. Ok, laugh as you want, then keep on reading.

It was impressive for me to meet Alex, as it is probably going to be for you now, those who didn’t have the chance yet.

After a while I met him, we started to date, then to know his stories of life. This made me fall for him, because we’re talking about real passion and desire to live and not only to live, but to make the best of his life! He’s really resilient and that amazed me.

And here we go:

There are some things I definitely know I can’t share, but those standing strictly about the bike, I mostly will.

For those who haven’t met Alex yet, I promise I’ll try to show a bit of who he is, with the little he has! Meanwhile I have to tell, I feel like I have no choice, ‘cause no one will. For Alex, riding enduro is beyond passion, it’s what he’s breathing every day and I’ll tell you why I consider this:

When he was 19th he get his first crash and it was an aweful one! He remained blocked between a house and a pillar, while riding a bike. He just had a thought that he has enough space to avoid a car accident so he chose that shortcut, but he remained there. Just like that, he tried to give a call and he realised he can’t use his hands; any of them. Then he tried to get off of his bike and he realised he’s… f*cked! One broke leg and ruptured muscle at the other leg. He was so messed that docs haven’t noticed his smashed finger at the left hand so he ended up with loosing it. As if all this weren’t enough, before leaving hospital, the therapist told him he might never walk again. That was the moment he decided to start his own recovery, walking the mountains around the homeplace with a friend and today this is how he rides! Still, some of you may have noticed the limp he tries to hide.

At 27th, life gave him another challage in 2014 when the waters took him on a flood, while riding enduro with tourists. He managed just to yell “go away” to the riders, then the flood took him away. He didn’t know to swim, but he tried all the time to grab anything just to hang somehow and finnaly get out of the furious waters. They’ve been looking for him in the river for a time, and after they find him, they realise the bike isn’t in the area. It was far away down the river, all smashed, blocked in some trees and rocks. Alex was taken to the Inn with sand in his eyes then, as resilient as he is, the next day he continued his work. Those who rode with him then, helped him get the bike back to life and this was a real thing of how much people who meet Alex end up loving him. 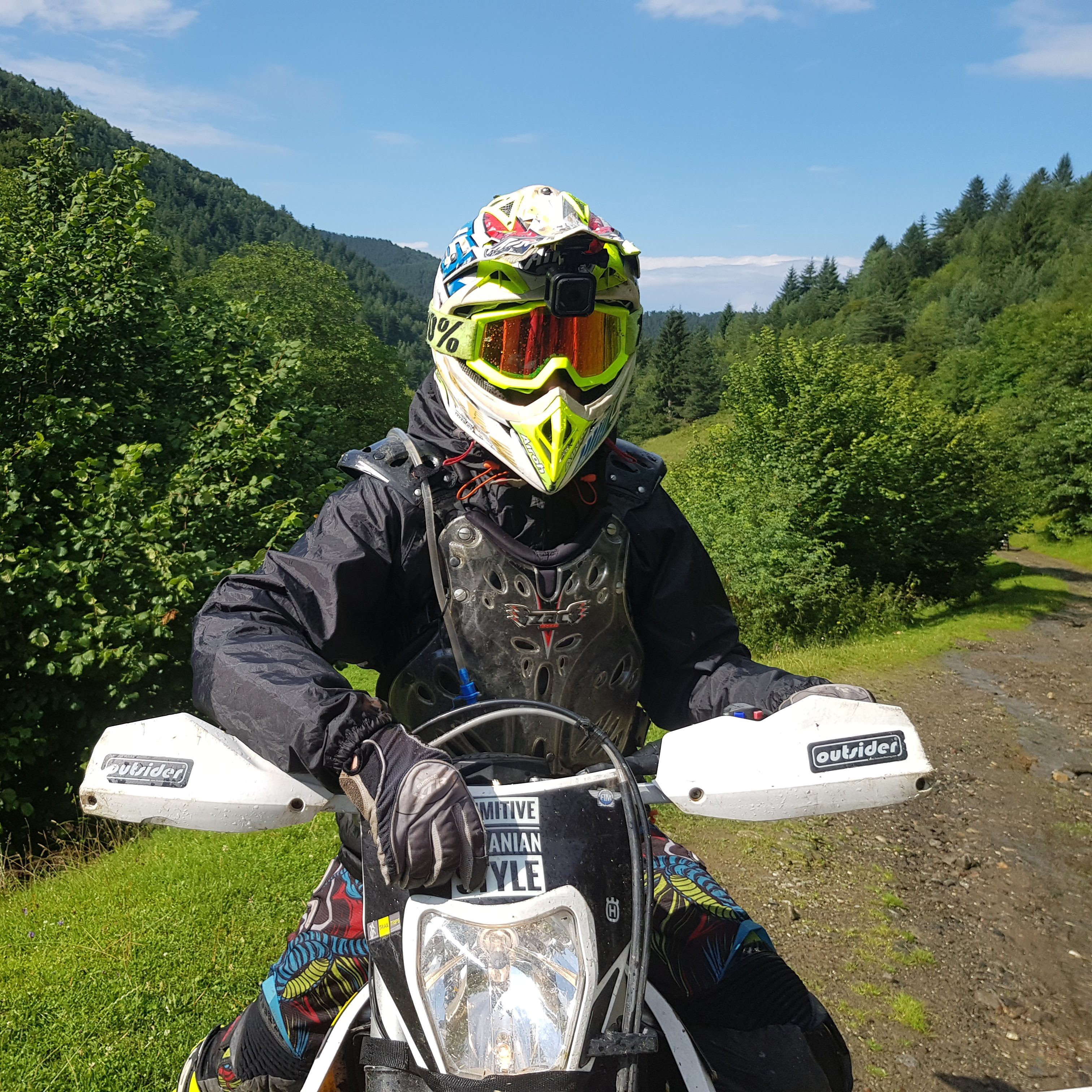 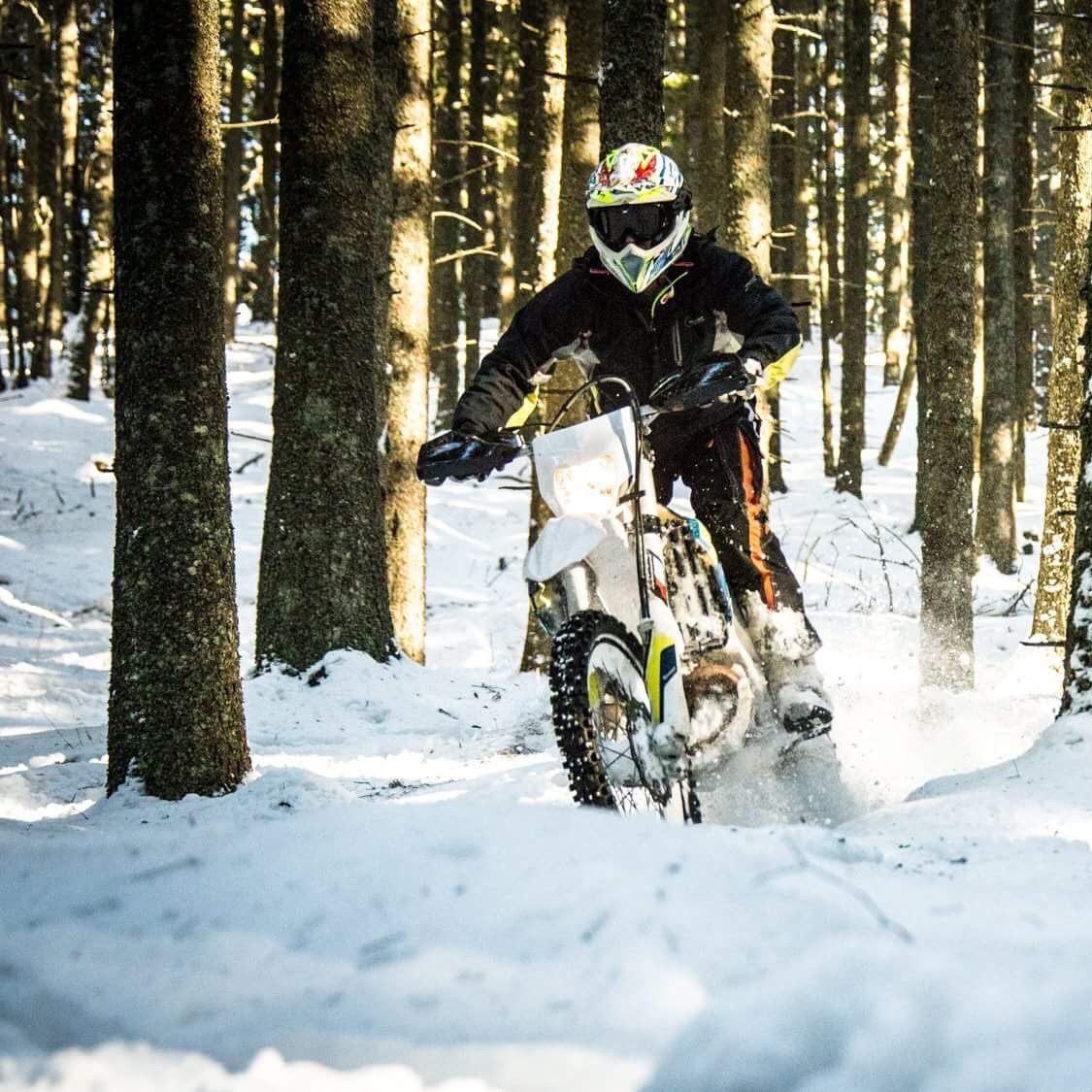 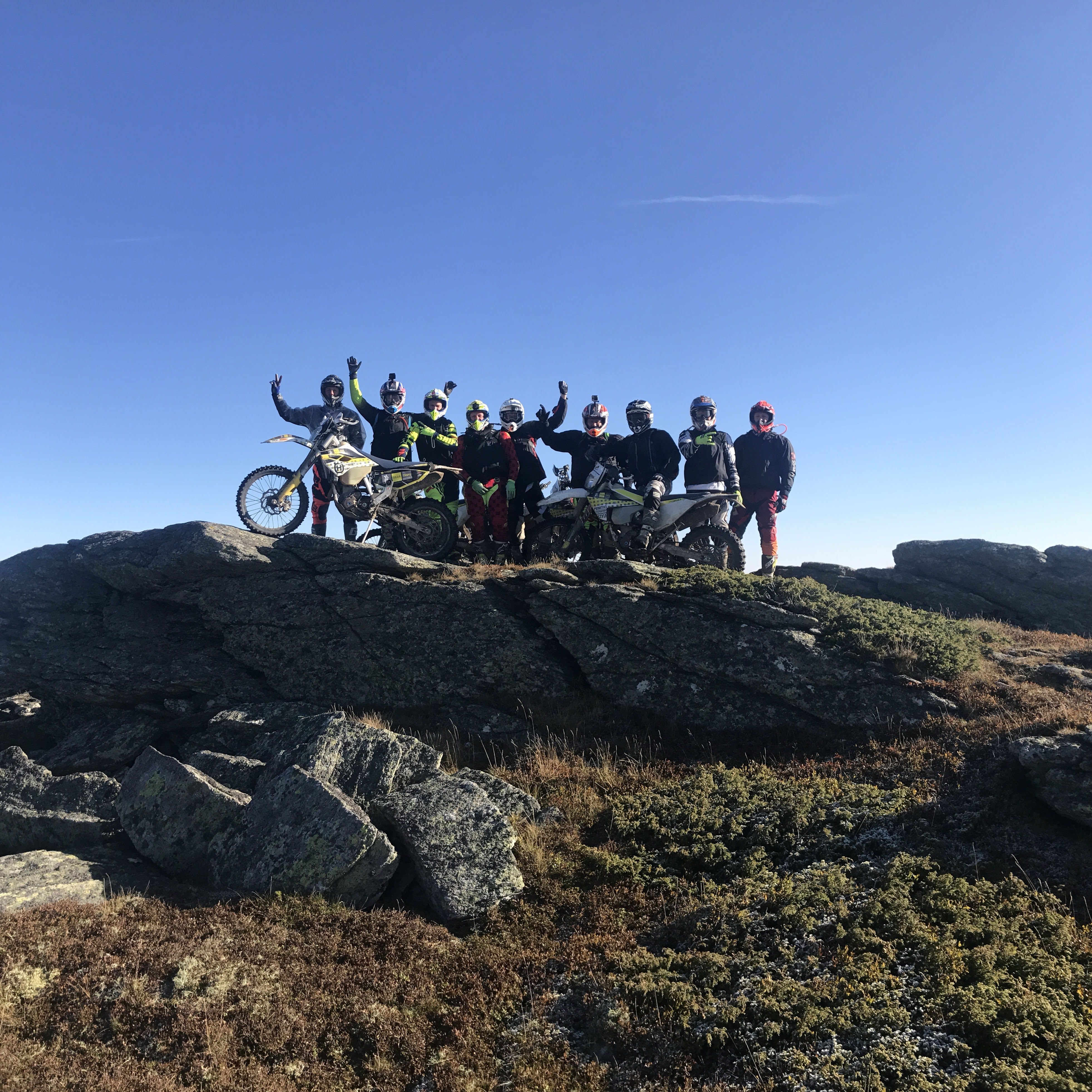 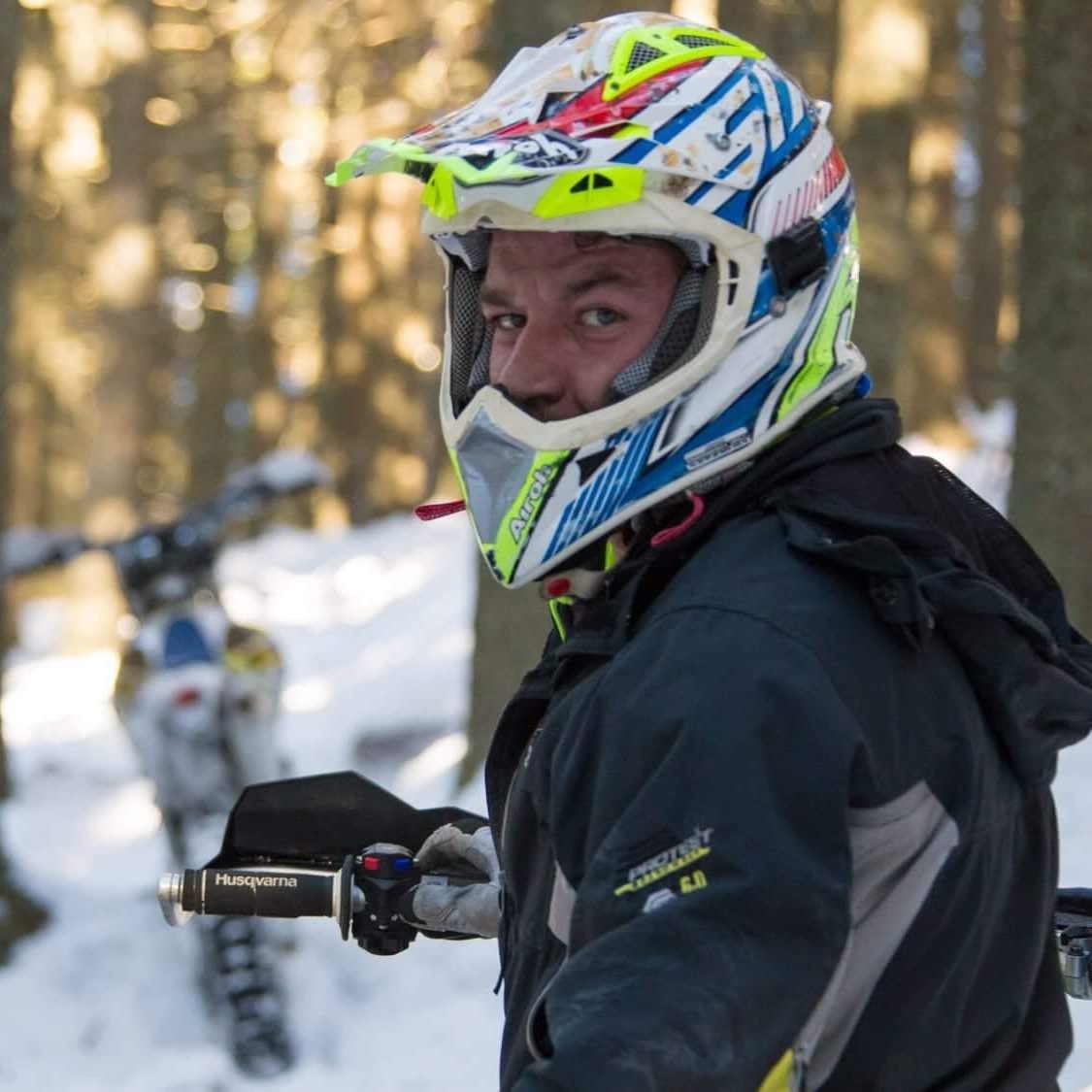 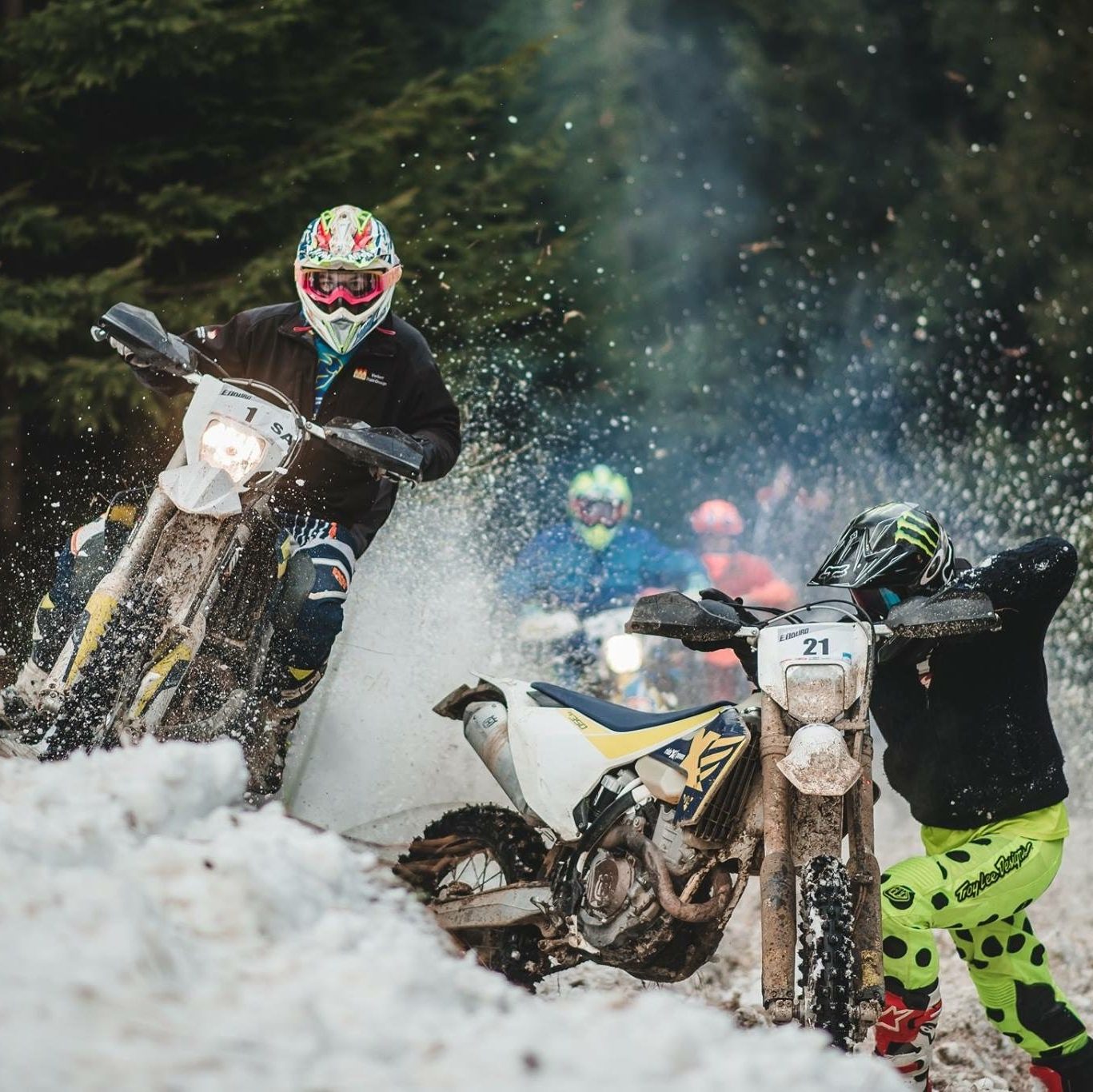 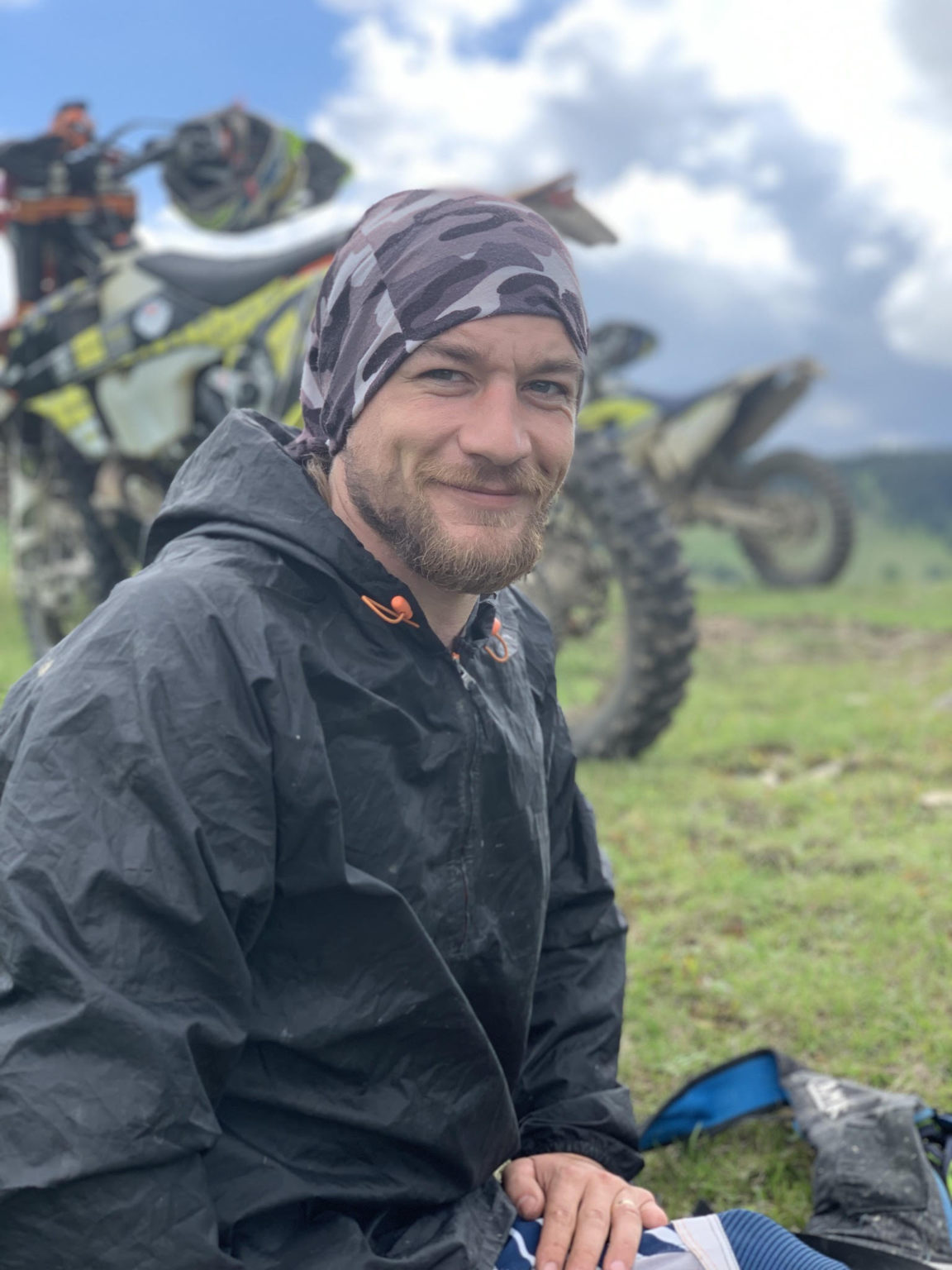 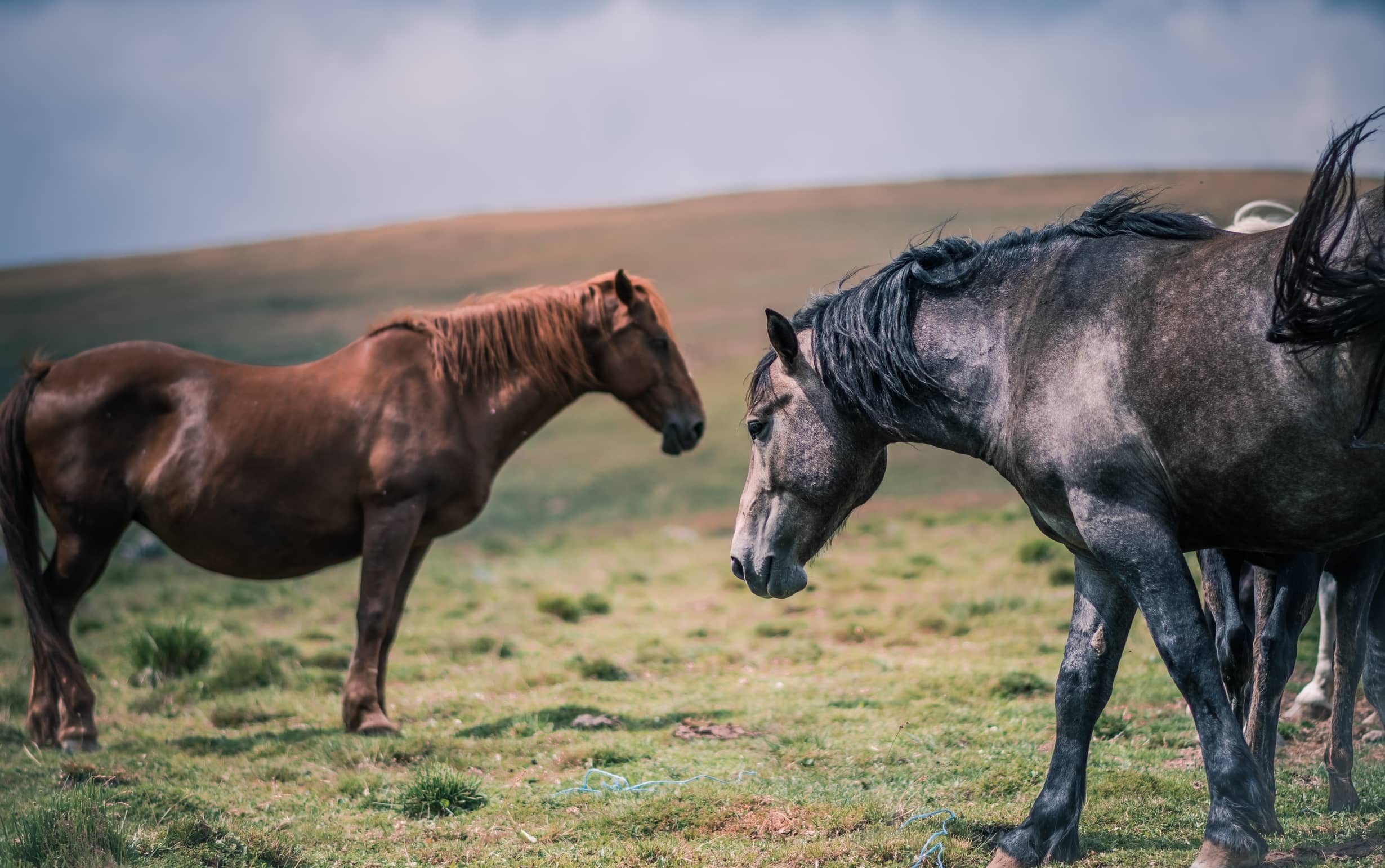 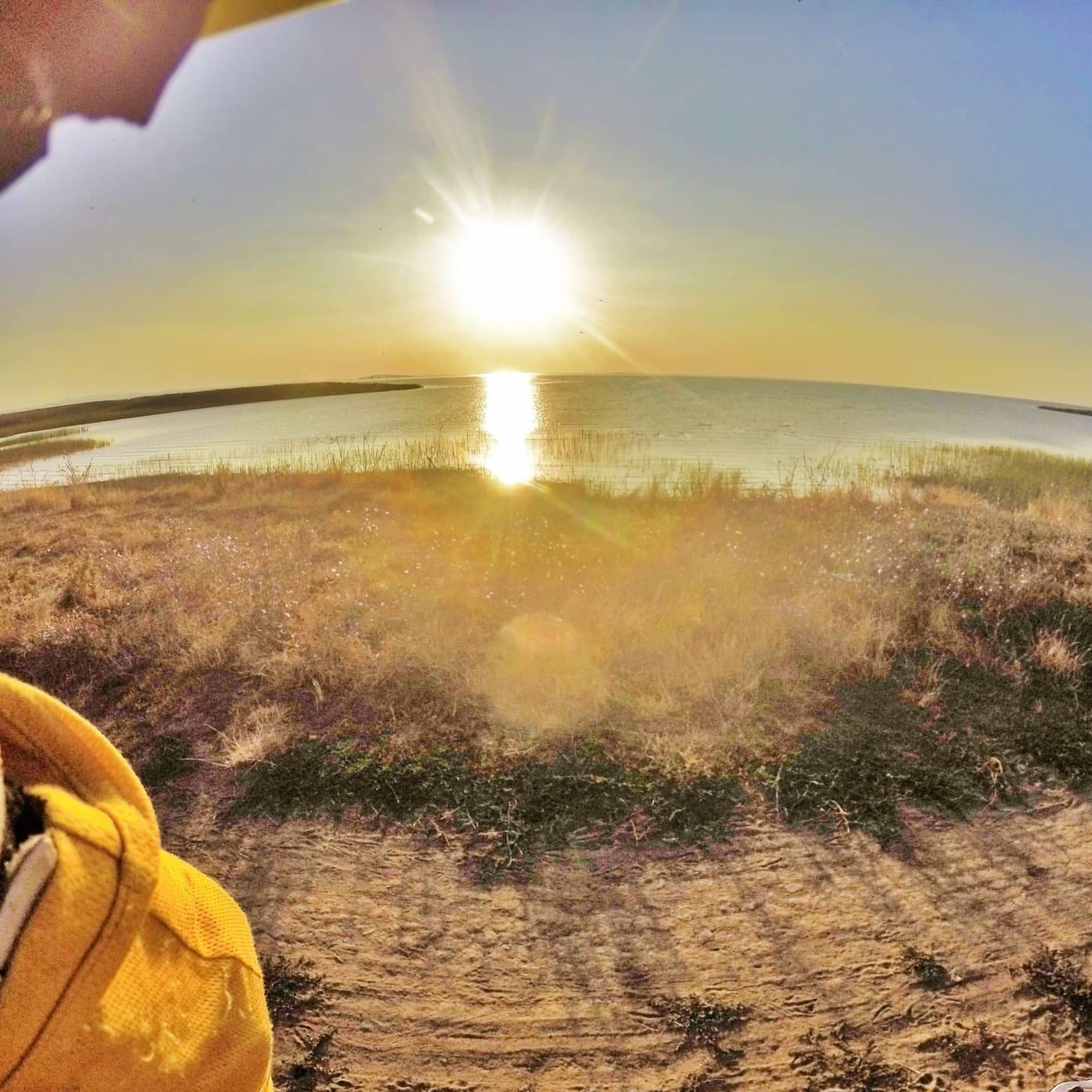 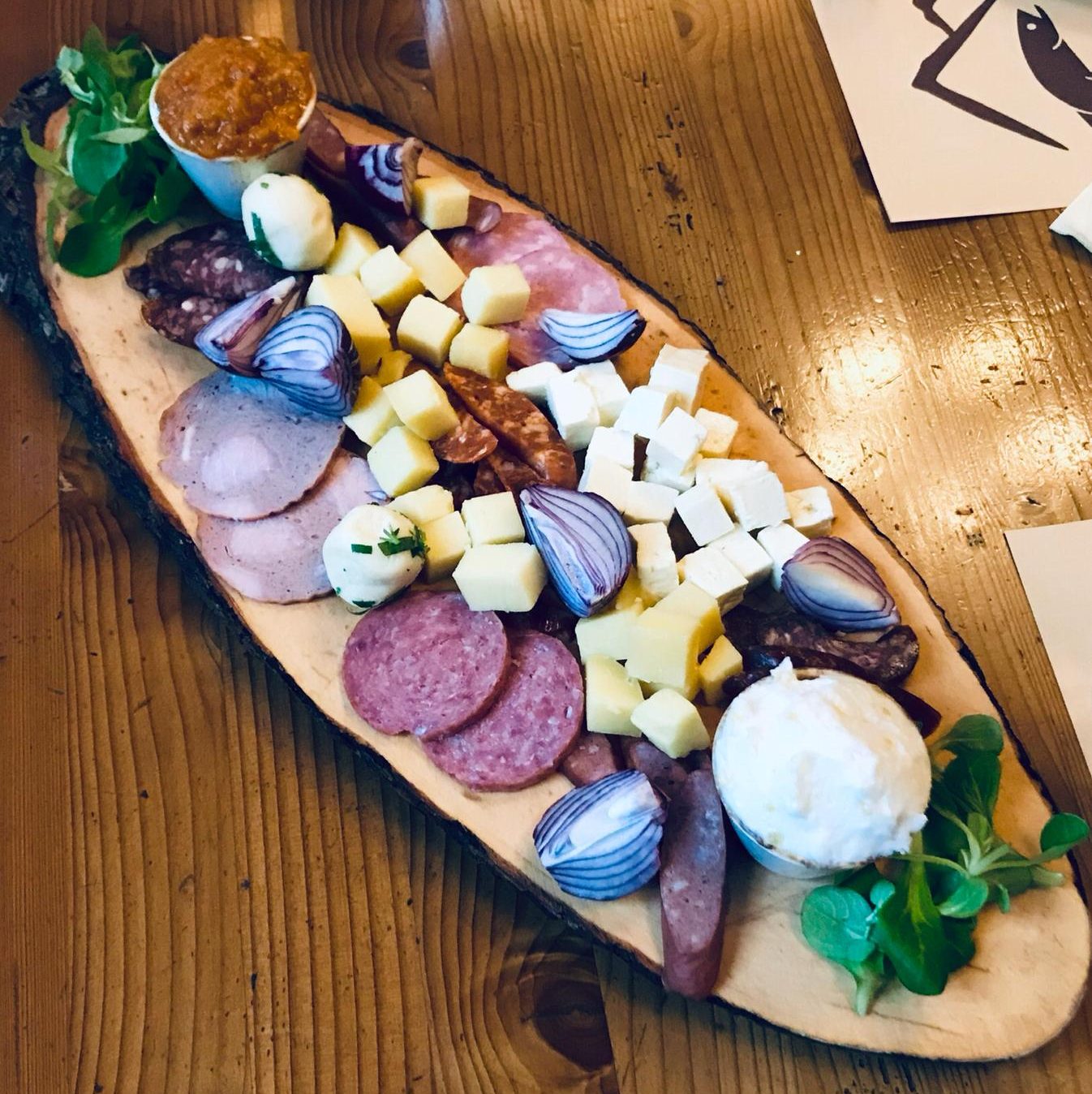 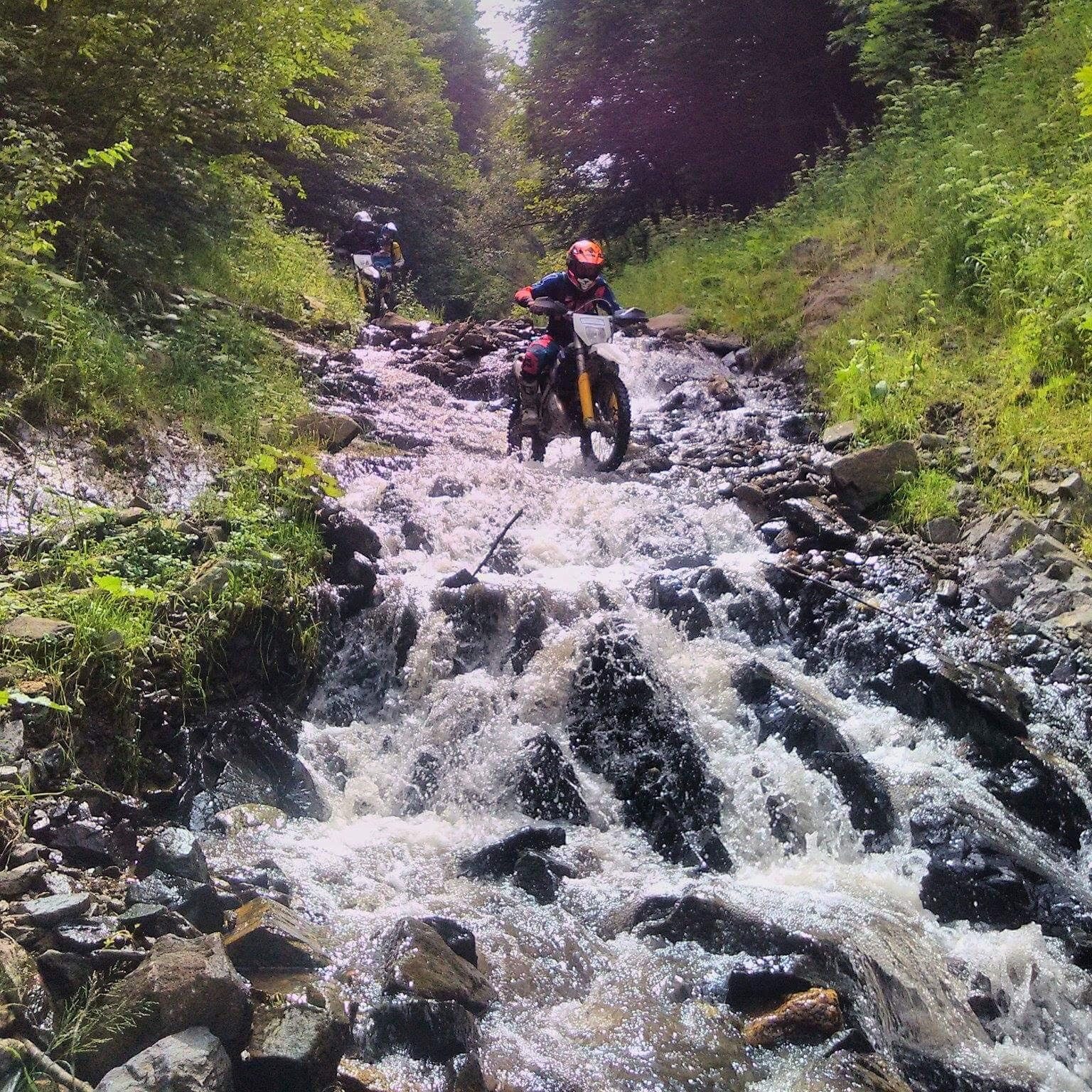 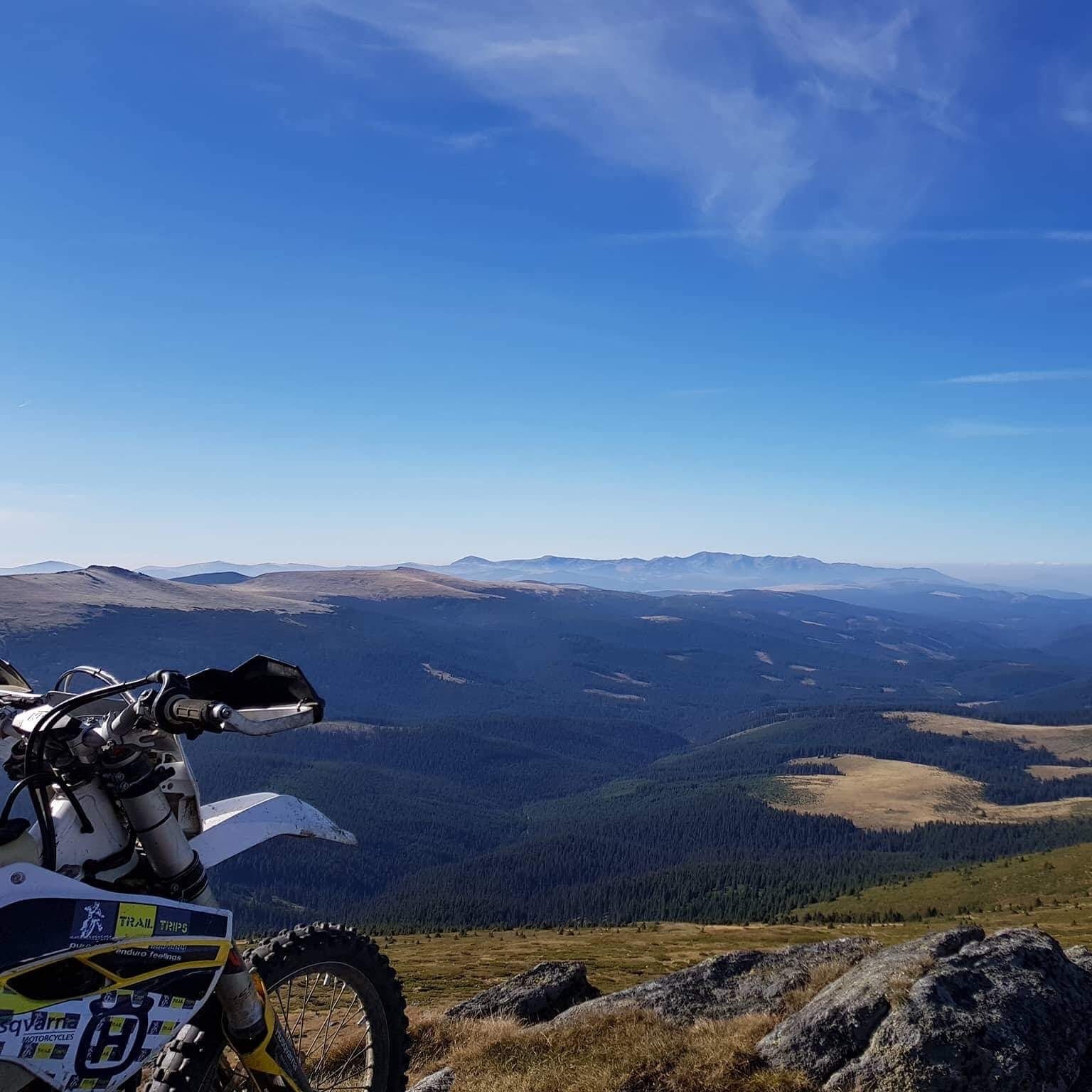 He is your main enduro guide, one of the most ambitious you’ll ever meet. He will introduce you to the splendor of the forests and the noble mountains. You will discover the legendary Red Bull Romaniacs enduro trails and the rustic life of Romanian people as it is: warm, hospitable, enjoyable and beautiful.

This was Gio on the buttons,